Eoropie, Isle of Lewis
12 Lapland Buntings were on the machair to the north mid morning

Uig Sands, Isle of Lewis
75 pale-bellied Brent Geese were there this morning.

Port of Ness, Isle of Lewis
A Pied Flycatcher and Whinchat were at the north end of town

Loch Sandary, North Uist
A Ruff was there today

Loch Paible, North Uist
50 Pale-bellied brent Geese were on the loch and a further 60 were seen at Aird an Runair. Elsewhere on North Uist c50 pale-bellied Brent Geese flew south over the Committee Road, 10 flew west at Griminish Pier and 54 flew south-west over Clettrevalearly afternoon.

Mark Oksien found a Western Bonelli's Warbler at Bolnabodach, Barra this afternoon. It's elusive but has been calling from time to time. It's in trees by Aros Cottage, best viewed from path south-east of the property. Also 2 Lapland Buntings flew over and the 2w Iceland Gull was still at Castlebay. 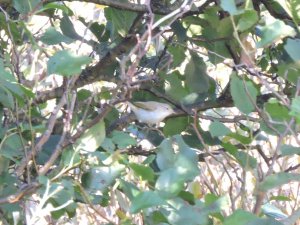 No sign of the Subalpine Warbler today
7 Ruff and 6 Lapland Buntings on Ormiclate machair late afternoon but no sign of the Adult American GP seen there the other evening.