Hirta, St Kilda
The female ***Snowy Owl*** was again seen on Hirta. The Rose-coloured Starling and a Ruff were also present in the village

Stornoway, Isle of Lewis
19 Leach's Petrels and 3 Sooty Shearwaters were seen from the Ullapool to Stornoway ferry this morning.

Nunton, Benbecula
A Ruff was seen in fields there

The Range, South Uist
A Ruff, Whimbrel and a Pink-footed Goose were there today

Stoneybridge, South Uist
A Whimbrel was there and another was nearby at Aird-mhicheil. 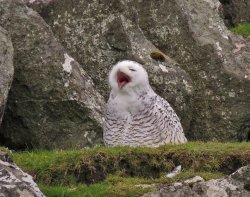 News from Tony Marr at Ness;

No seawatching today – nothing to watch – but an interesting mix of landbirds, some quite unusual here.

Garden Warbler – one in Port of Ness gardens
Whinchat - one in gardens
Robin – 8 in Port of Ness
Tree Sparrow – 2 (appeared to be juvs ) by Port of Ness PO
Linnet - 20 there
Greenfinch – 40 there
Common Snipe – a flock of 22 flew south (am)
Barn Swallow – 9 at Port of Ness and one at the Butt
Willow Warbler – one in South Dell
You must log in or register to reply here.
Share: Facebook Twitter Reddit Pinterest Tumblr WhatsApp Email Link