Gearraidh Dubh, Grimsay
A pair of Goosanders were seen in the channel there today

News from Tristan, Isle of Lewis

Calm, clear and sunny all day - perfect viewing conditions on the Braigh, where on the north side (Broad Bay) there was a group of 10 Velvet Scoters, all females or 1w males. Also 58 Common Scoters and 100s of Eiders.

On the south side, two flocks of Black-throated Divers totalled at least 54 birds - in theory, nearly 10% of the British wintering population. Unfortunately, like the scoters, they were too distant to photograph.

On Barra 24 Snow Buntings were still on the beach at Eoligarry, though they're getting more mobile now. The parvipes type Canada Goose was out on the end of Borve Point and 43 Pale-bellied and 1 Dark-bellied Brent Geese were at Traigh Mhor. 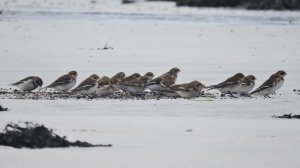 Wetland Bird Survey (WeBS) today at Loch Bee and South Ford. It being calm made it good conditions for counting but the presence of 2 White-tailed Eagles at the north end of Loch Bee kept birds there on the move. Around the loch there were 315 Mute Swans, 560 Wigeon, 183 Teal, 164 Mallard, 235 Lapwing and 177 Greylag Geese. Counts of note were 36 Whooper Swans, 85 Tufted Ducks, 21 Goldeneye and 2 Long-tailed Ducks. 110+ Greenland White-fronted Geese were seen to fly in from the east 30 minutes after sunrise and 2 female Scaup and the Little Egret were in the South West corner of the loch. Small passerines were conspicuous by their absence with no Twite or Skylark in the count area. 18 Goldfinch at Iochdar were the only ones seen.

South Ford was very quiet but 6 Greenshank were present and a count of 122 Shelduck was higher than usual.

Elsewhere, there was a pair of Pintial on Coot Loch, Benbecula, 21 Barnacle Geese at Corran Ormiclate and 52 Whooper Swans on Loch Bornish 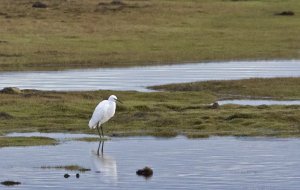 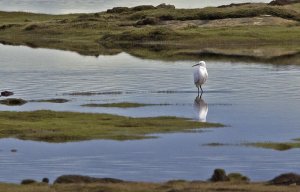