Leurbost, Isle of Lewis
A Willow Warbler and a Redpoll were seen today.

Bunavoneadar, Isle of Harris
An adult Iceland Gull was seen near the tennis courts today

Monday 23 April
White Wagtail – 52 along cliff tops west of the Butt lighthouse (am) (with 55 Meadow Pipits)
Whimbrel – 8 at the Butt
Pink-footed Geese – 33 over the Butt (12.15) went off out to sea to NW
Goosander – still on Loch Stiapavat
Golden Plover – 1,050 on Eoropie machair
Blackcap – female in Port of Ness 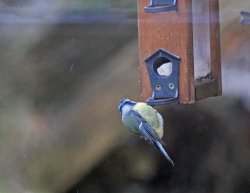 A Response has already been received from Tony Fox regarding the colour ringed Greenland White-fronted Goose seen at Loch Mor, Benbecula yesterday.
Tony's response was as follows:-
"J5N was an adult female when caught at Kinnabus on Islay on 11th November 2016, part of the ongoing WWT work as part of Ed Burrell’s PhD project at Exeter University. It remained there all last winter with 7 adults and 1 first winter bird with which it was caught, being seen at nearby Upper Killeyan on the Oa of Islay, but not seen in the interim. As you will see, so far this winter it has been largely unadventurous and like 80-85% of adults, has remained site loyal between successive winters. It is a little intriguing to know why it has interrupted its spring passage with you and why so late".

Many thanks to Paul Boyer for the information

115 pale-bellied brents plus a single dark-bellied brent goose were new in at Traigh Mhor, Barra today. The flock also contained 6 colour-ringed birds. 3 sandwich terns were also in the area.

Ardivachar headland.
120 black-tailed godwits did a circuit of the headland this morning and settled back in the Cottage Garden Bay area.
A good movement of whimbrel moving north: 8 seen but must be over 20 heard.
Likes: YvonneB
B

At Aird an Runair, North Uist this morning a flock (presumably same of previous day) of pale-bellied Brent Geese flew over the headland (later in the bay opposite RSPB visitor centre but before I could get an accurate count flew back to Aird an Runair), the 28 Black-tailed Godwits were still present (now with a Ruff) and one seen to be colour-ringed, there were 19 Whimbrel in the area and single Common and Little Terns were seen together with at least two Arctic Terns.

The Ruff is the lowest bird.

Yesterdays flock of Black-tailed Godwits were still near the E side of Loch Grogary.
Likes: YvonneB
C

An unplanned trip to Benbecula!

Long tailed Duck 6. Good numbers of waders around including 134 Sanderling, 60 Dunlin, 4 Whimbrel. White Wagtail 22 feeding on the seaweed and beach.

waders on the move over the road near Aird included Redshank 113N in 3 flocks, Sanderling 15N, Golden Plover 105N, Black-tailed Godwit 124. Also a male Hen Harrier hunting there and two Common Tern over the pools.

St Kilda has held a few migrants in the past few days, the highlight being a juvenile Glaucous Gull present daily since 20th, small numbers of Chiffs and willows and a single Blackcap.
Likes: Paul Boyer, YvonneB, Chris Johnson and 1 other person
You must log in or register to reply here.
Share: Facebook Twitter Reddit Pinterest Tumblr WhatsApp Email Link