Two small skeins of Barnacle Geese this morning (22 and 20) heading north. A small indication of some migration.
B

A skein of geese (ca.30) also headed N off Aird an Runair, North Uist in the late morning (too far out for specific identification). The ♂ Green-winged Teal was present again on Loch a' Roe and there were three Snow Buntings with a Twite flock between the headland and RSPB visitor centre. 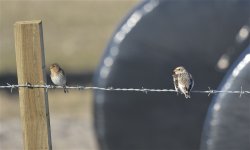 After five weeks of very little bird activity, today saw the first significant arrivals and departures of the spring on a lovely calm sunny day.

Port of Ness
Whooper Swan – two flew in off the sea SE-NW early in the morning and flew towards Loch Stiapavat.

Loch Stiapavat
Barnacle Goose – 92 today was the largest number so far this year (usually 70-80).
Whooper Swan – two have been present for several weeks: in late afternoon they took off and went off out to sea to NW over the Butt.
Moorhen – one present now since 20th.

Skigersta
*WHITE-BILLED DIVER* - In late afternoon two about 500 yards off the pier, their yellowish bills shining in the sunlight.