Sound of Taransay, Isle of Harris
2 drakes and a female Surf Scoter were seen in the sound today

Carinish, North Uist
A Jack Snipe was seen the today

Among the species seen this morning on a visit to the Rubh' Arnal area, North Uist were 29 pale-bellied Brent Geese (all adults), a good count of 52 Greenfinches at the fish dump and 27 Goldfinches. One of the Brent Geese was seen to be colour-ringed - yellow N on left leg and blue Z on right. This bird was ringed in Iceland on 11th May 2017, seen on four occasions at Rubh' Arnal between 4th December 2017 and 15th March 2018, back in Iceland on 12th May and lastly seen by Bruce at Eoligarry, Barra on 20th November. 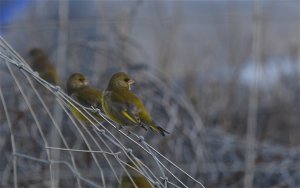 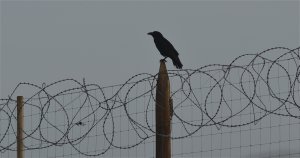 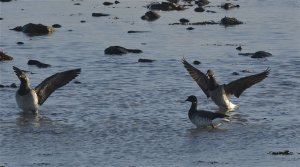 At Balemore the single pale-bellied Brent Goose was seen again in the Barnacle flock as well as the bird with the white head and neck.

A run up to the north of South Uist today. Three White-tailed Eagles were seen putting all the birds up at Loch Bee (2 adults and a juvenile). There must have been 300+ Lapwings up in the air - not usually this many recorded on the monthly WeBS counts! Sadly no sign of any Greenland White-fronts anywhere around Loch Bee though I've received a report that birds have been heard but not seen. Will have to investigate further.

By Hebridean Jewellery there were quite a few waders roosting up at high tide including, c70 Grey Plover plus c300 Dunlin, and Oystercatchers.

At Northbay there must have been 200 Bar-tailed Godwits roosting on the beach there at high tide.

At Ardivachar a Pied Wagtail was there - i'm amazed there weren't more birds as there were plenty of flies around the masses of rotting seaweed.

At Aird-mhicheil there was a colour-ringed Oystercatcher, managed to get photographs. The Darvic was the same colour and letter combination as the one seen at Kilpheder by John Kemp on the 23rd December though John's bird seems to have had a different colour combination of rings on the other leg as the bird seen today. It is believed that these are Icelandic ringed birds and we're awaiting confirmation from the project co-ordinator.

I walked back to Askernish from Kildonan along the beach and it was fairly quiet though there were around 20 Golden Plover. 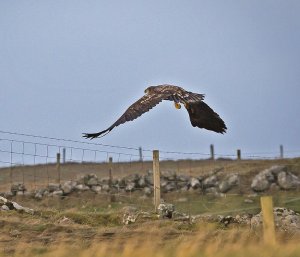 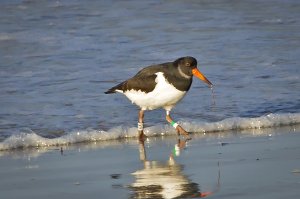