Borve, Barra
The small Canada Goose was there again today, viewed from the Craigston layby

Loch Bee, South Uist
Circa 130 Greenland White-fronted and circa 50 Barnacle Geese were on the west side of the loch today

A second day of "New Year Birding" began with a walk around at North Locheynort. It was fairly quiet there though sighting of the day was a Golden Eagle being mobbed by a Hen Harrier. Shag, Dunnock and Sparrowhawk were added to the list at Locheynort as well as the Golden Eagle.

Flushed a Woodcock at Druidibeg - very little else there - it seemed to have the reserve pretty much to itself.

Year list now stands at 68 species and we haven't made it out of south Uist tomorrow. 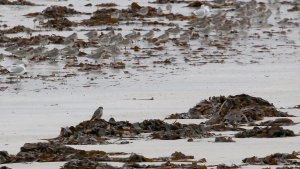 Merlin on the beach at Northbay, eyeing up the many waders that were roosting there
Hebridean Imaging

News from Tristan, Isle of Lewis

Yesterday (Jan 1st), a single Black-tailed Godwit was with Curlews at Loch Ordais - unusual on Lewis in winter. Also a Mute Swan and 150 Wigeon.

Today (2nd) in Stornoway, an adult Iceland Gull was below Cross Street - the first I've seen here this winter.
Other sightings included: 2 pairs of Shoveler at Steinish, 430 Wigeon on the north side of Stornoway, inc. Steinish, 1 Little Grebe at Goat Island and a flock of 120 Brambling around the golf course
You must log in or register to reply here.
Share:
Facebook Twitter Reddit Pinterest Tumblr WhatsApp Email Share Link
Menu
Log in
Register
Install the app
Top