Aird an Rùnair, North Uist is well known as the premier seawatching site in Britain for witnessing the spring migration of both Pomarine and Long-tailed Skuas (see for example Scottish Birds 33: (3): 275-280). There was an even larger Long-tailed Skua passage in May 2015 when an astonishing 4,640 passed (over 2,000 more than in 2013). Unless it is very windy seawatching here in autumn is hard work with most birds usually heading far out on a SW heading. Griminish Point, a headland some 7 km to the north, can be far more productive at this time of year but access has become more difficult in recent years with a quite a long slog out to the point from the main road. On the 31st August the weather conditions looked good after midday for a seawatch but as I was suffering from a heavy cold I decided the effort to get to Griminish Point was not worth it so I opted to try from Aird an Rùnair. My visit started well; as I was driving out towards the parking spot I disturbed a Turtle Dove from the track. On arrival at the end, the Monach Islands were not visible as fairly frequent pulses of light rain swept across the headland and watching from the car nothing much appeared to be moving through. Anyway I needed to be much further around the headland in order to see any movement and when the rain eased off I made my way out to a relatively sheltered position amongst he rocks. Eager to start a seawatch, I didn’t give the waders on the beach much scrutiny, but noticed these were mostly Dunlin with small numbers of Knot and Bar-tailed Godwits.

A two-hour seawatch (13.30-15.30 hours) in mostly sunny weather produced 15 Sooty Shearwaters and 485 Manx Shearwaters but not much else. Most were passing quite far out so the seawatch was hard work and two hours was enough for me. As I returned to the car the tide was fast coming in pushing all the waders closer in and onto the banks of seaweed. I sat down for a bit more stability in the WSW F4-5 wind to study these and started to go through them systematically. After a minute or so I came across a bird that was obviously no Dunlin with startling white underparts and rich rufous upper scapulars. Also it had a longish bill, and nothing about it suggested that it was a Little Stint or a Semipalmated Sandpiper (I have seen several on North Uist including a spring bird at Aird an Rùnair – admittedly identified by photographs much later from when first seen!).

Although my only previous experience of Western Sandpiper was of a bird in Devon many years ago (despite the time lapse I remembered that it had a particularly long Dunlin-like bill), my first thoughts were that the Aird an Rùnair was the same species. I made a couple of phone calls to alert others and Ian Thompson rang back to say he would be with me in an hour. As I was getting some photographs, a Peregrine shot onto the beach creating panic among the waders, but missing its intended wader quarry. It didn’t take long for them to return however so while waiting for Ian to arrive I decided to check out the nearby stubble aware that Tony Marr had seen a Buff-breasted Sandpiper at the Butt of Lewis earlier in the morning. Apart from a couple of Lapwings there didn’t appear to be much else but on walking a bit further into the stubble, up got a Buff-breast. Soon after, I got another flight view when the white underwing with a dark crescent on the primary coverts was seen. Also the bird called, a quiet, rather soft cheu, not often given but I have heard this on a few occasions from others that I have seen.

Returning to the beach, by the time Ian arrived the high tide had peaked making for a lot of movement among the waders. After a while they all settled down and we were able to get good views of the target bird and obtain some more photos. As an added bonus, the Buff-breasted Sandpiper also forsook the stubble and landed on the beach for a while. We were both reasonably happy that the bird was indeed a Western Sandpiper, but surely identification couldn’t be that easy. I was aware that some juvenile Semipalmated Sandpipers can show rufous in their upper scapulars, in fact one of three that turned up at nearby Loch Paible in 1999 showed this (a photo appears in the Outer Hebrides Bird Report). This, however, was nowhere near as bright and outstanding as on our bird. In addition, the bird’s structure and jizz appeared to be quite different from the Semipalmated Sandpipers that I have seen on the Uists (at least six in 1999 and singles in 2009 and 2013).

There have long been identification issues involving the two species and there is one such Outer Hebrides record not yet resolved of a bird seen by Andrew Stevenson on South Uist in early September 2012. It was initially thought to have been Semipalmated, but now by some as Western. Juvenile Western Sandpipers are said to moult during their southward migration and most will have moulted at least their scapulars by mid-September. Our initial caution on identification was later seen to be unjustified on the still-to-moult Aird an Rùnair bird. More identification questions are often posed with later autumn or earlier moulted birds that occasionally occur in Britain, but the Aird an Rùnair bird with its distinctive scapulars along with its structure and bill should ensure a safe passage into the record books.

If I had not felt under the weather on the 31st I would have undoubtedly gone to Griminish Point thus missing out on a rewarding afternoon’s birding. There was every chance, however, that it would have been discovered over the following days as it (also the Buff-breasted Sandpiper) remained until the 4th September. The day before I had managed to separate its call from the other waders and I noted it as a high jeet. 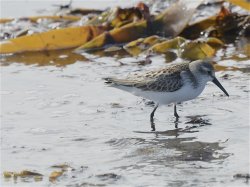