Borve, Berneray
A Yellow-browed Warbler and a Blackcap were there this morning

Loch Mor, Benbecula
A Ruff was seen there today

West Gerinish, South Uist
A female Scaup was in the south-west corner of Loch Bee. The *American Golden Plover* were on the flashes by Launch Area 3. A Ruff was also in the area

Barra
A Hawfinch, 16 Yellow-browed Warblers, Two Pied Flycatchers, a Chiffchaff, Grey Wagtail and 10+ Brambling were seen on the island today

3 Lapland Buntings were on Bornish machair in amongst a flock of circa 20 Skylark and my first Long-tailed Duck of the winter was on Loch Ardvule. 8 Whooper Swans were on Loch West Ollay and 37 Barnacle Geese were on the west shore where similar numbers spent last winter. 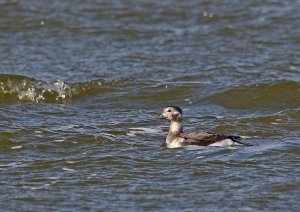 A NW near-gale with heavy downpours continued all day, with some sunny periods in the afternoon. It was uncomfortably cold.