The Braighe, Lewis
A Slavonian Grebe reported there today

Loch Bee still had some ice on the shallower parts of the loch displacing some of the duck to slightly more inaccessible areas. The most numerous species on the water were 748 Wigeon, 368 Mute Swan, 180 Mallard, 161 Teal, 26 Goldeneye and 11 Whooper Swans. 352 Greylag and 40 Greenland White-fronts were on the west bank as well as 192 Golden Plover, 164 Lapwing, 41 Curlew, 24 Redshank and a single Greenshank.

Other species can also be recorded on WeBS and those seen today were 155 Starling, 2 Snow Buntings, 6 Linnet, 122 Twite and a flock of 68 Skylark. 40 Barnicle Geese were outside the count area on Ardivachar machair

Elsewhere there were 2 Little Egrets on Loch Mor, Benbecula at 13.30 and then I saw another on Oban na Buail-uachdraich by Heb Jewellery at 14.25. Not sure just how many are on South Uist at present. Pick a number between 2 and 4.

As reported by Chris, there is a large gathering of Bar-tailed Godwits in North Bay. They looked spectacular against a sky darkened by heavy snow filled clouds and a rainbow 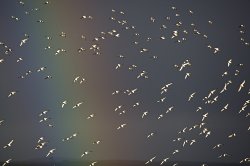 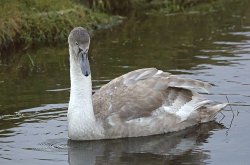