Lapland Buntings at The Butt

Loch Stiapabhat, Isle of Lewis
A 1CY *Mediterranean Gull* and a juvenile Pectoral Sandpiper were both seen from the hide this evening [see post below]

Ardroil, Isle of Lewis
A *Common Rosefinch* was seen there early afternoon

Scarista, Isle of Harris
A Little Egret was seen there this morning

Balgarva, South Uist
A **White-rumped Sandpiper** was seen briefly on the pools this morning

Stoneybridge South Uist
A Lapland Bunting was there today 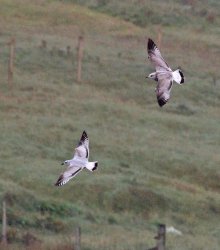 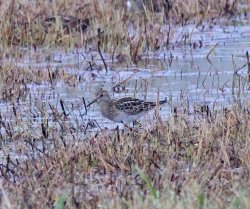 At Aird an Runair, North Uist this morning there were 164 Black-tailed Godwits on the stubble on the headland. Possibly more than this were present in the area as several sightings of smaller flocks in flight later. One was found dead - a bird-of-prey kill. The main flock were very flighty and accompanying them was a smaller wader that proved difficult to pin down. After a while it separated from the godwits and came closer before disappearing to the S. Views and distinctive krrrt calls revealed the bird to have been a Pectoral Sandpiper.

The previous day I made a brief visit to Loch Sandary, North Uist in the rain when a small wader flew over to the causeway. Although views through the 'scope at long range and amongst the vegetation the bird looked very much like a Buff-breasted Sandpiper. Weather conditions precluded a thorough search. A visit today in the late morning revealed two Ruff and a Black-tailed Godwit and then loosly connected to a Golden Plover flock in a field on the S side of the loch the Buff-breast. I was hoping to get some photos but with shooting/goose scaring activities in the area the plovers were very flighty and soon vacated the area.

After this morning’s arrival of 55 Lapland Buntings over the Butt, the day continued in a most satisfactory way. The highlights were as follows:
Golden Plover – 200 on the Lionel-Eoropie machair
Short-eared Owl – one by road down to Swainbost Beach
Twite – 125 on overhead wires by Lionel School
Tree Sparrow – 3 in Port of Ness
Whinchat - one there
Carrion Crow – one at Swainbost Beach
Pectoral Sandpiper – one with Common Snipe and 3 Ruff by Loch Stiapabhat, in front of the hide
Mediterranean Gull – a 1st-winter with Common & Black-headed Gulls in front of the hide (only my second here)
You must log in or register to reply here.
Share:
Facebook Twitter Reddit Pinterest Tumblr WhatsApp Email Share Link
Menu
Log in
Register
Install the app
Top