Tiumpan Head, Isle of Lewis
An adult Iceland Gull was there mid morning

Loch nam Feithean, North Uist
The two ***Cackling Geese*** were seen distantly at the west end of the loch this afternoon

Balgarva, South Uist
The *American Golden Plover* was again seen on the shore this afternoon before flying towards Hebridean Jewellery

Eochar machair, South Uist
A Lapland Bunting and a Snow Bunting were seen on the machair. 185 Greenland White-fronted Geese were nearby on the west side of Loch Bee and four Scaup were on the loch

Balnabodach, Barra
A Jack Snipe was seen there this afternoon 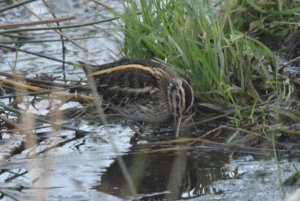 The 2 cackling geese were with barnacles at Balranald today west of Loch nam Feithean viewable from the track heading out to Aird an Runair at Goular looking south.

Also 50-60 snow buntings there and nearby a slavonian grebe on the sea at Hougharry.

On New Year's Day, there was an adult Iceland Gull at Goat Island, Stornoway. Also 2 Little Grebes in the inner harbour. This afternoon, a juv Glaucous Gull was at Stornoway landfill site.