Loch Barvas, Isle of Lewis
A flock of 21 *Snow Geese* which included two blue-phase birds were seen in the north-east corner of the loch. Also present were 2 pale-bellied Brent Geese, and one Barnacle Goose

Stonornoway, Isle of Lewis
A male Brambling was seen in Benside

Balranald, North Uist
71 Pink-footed Geese flew north this morning. A Ruff was also in the area and a Whooper Swan was by Loch nam Feithean

Loch Sandary, North Uist
A Glaucous Gull and two Whooper swans were there this evening

Borve, Benbecula
Three Dotterel were seen on the machair this morning.

West Gerinish, South Uist
A drake Garganey was in the south-west corner of Loch Bee 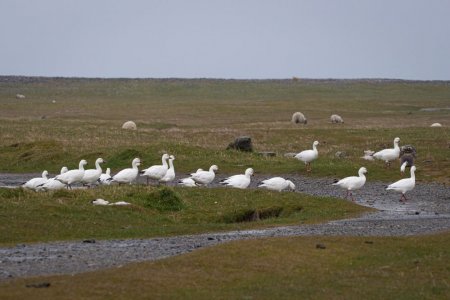 A steady pasage of whimbrels all weeks with about 50-60 daily. More today, c80 stopping briefly to feed on the headland, much to the annoyance of the nesting lapwings.

A corncrake ran across the road in Iochdar this morning.
B