Hirta St Kilda
The ***American Buff-bellied Pipit***, the female ***Snowy Owl*** and **Short-toed Lark** were still present today. 25 Snow Bunting, 8 Pink-feet, 2 Brent Geese, the Long-tailed Duck and Slavonian Grebe were also on the island. A grounded Storm Petrel fledgling was ringed prior to release and the two Leach's Petrel's reported as being "trapped and ringed" were simply monitored in one of the purpose built nest boxes.

Loch Stiapabhat, Isle of Lewis
A Pectoral Sandpiper was seen on the machair at the north end of the loch. Two Bramblings were nearby in Port of Ness

Sound of Taransay, Isle of Harris
The drake Surf Scoter was again seen from the Seilebost road viewpoint this morning 11 Common Scoter were also present. Three Whooper Swans and 20+ Pink-footed Geese were in Seilebost

Langass Lodge, North Uist
A Yellow-browed Warbler was there this morning

Morghan. Isle of Barra
The *Kingfisher* was seen there again today although it remains elusive.

Castlebay, Barra
The Yellow-browed Warbler was still around the football pitch this morning 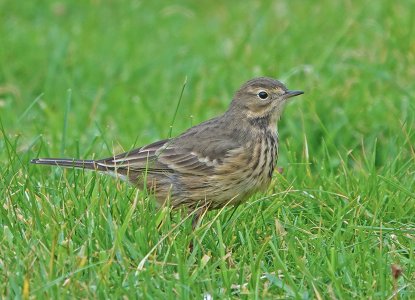