Blackpoll Warbler, Lochmaddy
North Uist, 23rd October 2017
The fourth Outer Hebrides record​
The year 2016 was an outstanding year for North American passerines in the Outer Hebrides with White-crowned Sparrow and Black-billed Cuckoo in the spring and Eastern Kingbird, Yellow-billed Cuckoo and Swainson’s Thrush in the autumn. One that ‘got-away’, however, was a White-throated Sparrow in Lorna Macleod’s garden in Lochmaddy, North Uist in October. Although present for virtually the entire month it was only heard or seen briefly by Andrew Stevenson and myself on four occasions and this was insufficient to prove the record to the rarities committee. Ironically (see later) White-throated Sparrows are said to often come to investigate if you make pishing sounds.

Fast forward a year later and in the same Lochmaddy garden. The 23rd October started with cloud and rain and as my wife was going off the island I dropped her at the ferry terminal in the late morning. Shortly after I discovered I had left my waterproofs and notebook at home and although the rain had stopped the sky looked threatening so it was a toss-up between returning home or doing some birding and hoping it didn’t rain. There are a number of good areas in and around the township worth checking for migrants with the area by the old pier/Lorna’s garden being one of them. The rear garden is particularly good being secluded and comprising more or less of natural habitat (it is many years now since it has been used for any kind of cultivation). So as fate would have it I plumped for a visit here. As I made my way to the end of the garden there was very little bird activity but this changed suddenly when a Sparrowhawk came through and several species started alarming. One call sounded interesting, although not that of the species of this note, and this was a cue to put my Audubon Bird Call device into action. Many times I have used this without attracting anything unusual but on this occasion the result was spectacular for instantaneously there came distinctive chip calls and a Blackpoll Warbler appeared in a tree right in front of me! To say I was taken by surprise was an under-statement but I managed to get some record shots so there would be no repeat of the ‘Not Proven’ White-throated Sparrow of the previous year. Although not having seen Blackpoll Warbler for a good number of years the bird was instantly recognisable by its lightly streaked olive-green mantle, yellowish tinge to throat and breast, two prominent white wing bars, white fringes to dark tertials and dark legs that contrasted noticeably with yellowish feet. After a minute or so the bird moved away and as there was no phone signal I decided to return home and phone the news out.

The weather had changed for the better when I returned in the afternoon. Along with four other observers the bird was active at times and thankfully behaved in complete contrast to the elusive sparrow. Although it looked healthy enough David Henshilwood later told me that it was hunched up and immobile for a while when he was watching it. Whatever its fate one can only marvel on its amazing journey to reach our shores. There was no sign of the warbler the next day and the only bird of note was a Blue Tit (a very unusual visitor to the Uists) seen by Terry Easter.

There have been three other Blackpoll Warblers seen in the Outer Hebrides. The first was seen by Bob Wemyss on Lewis in 1996 (fourth record for Scotland and the first outwith Shetland) and the other two by Andrew Stevenson (who has now seen three) on South Uist in 2003 and 2005. 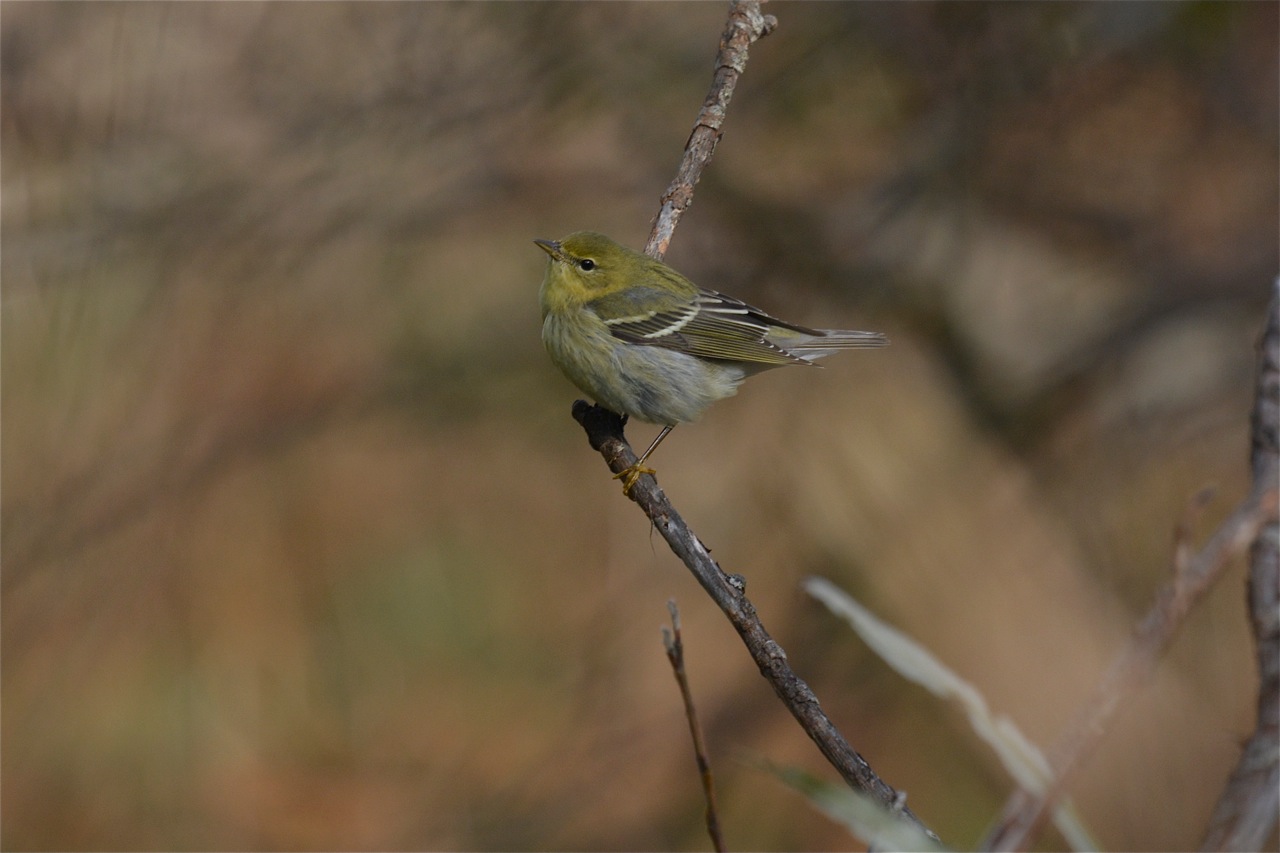