Stornoway, Isle of Lewis
A 1st winter *Mediterranean Gull* was on the beach at Holm

Tarbert, Isle of Harris
6 Bramblings were there today

Balemore,North Uist
2 Wheatears were seen on the machair there and 2 Swallows were nearby at Loch Sandary

Balranald, North Uist
1,000+ Barnacle Geese were there this morning

The American Golden Plover was again on the field opposite the Askernish club house and a single Swallow was hawking insects over the same field. It didn't look easy in these winds. 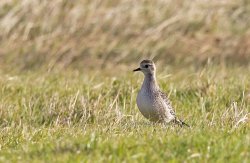 Not much was on the wing today in the gale-force winds at the few places visited on North Uist. First stop was at Loch Sandary but there was no sign of the Lesser Yellowlegs seen yesterday (presumed same as the one at Aird an Runair on 8th). I was going to head further N but decided to have a look at the S end of Loch Paible as there was a good high tide and maybe a lot of birds would be visible from the car at the road end. As it turned out there wasn't a great deal but after only being there a short while an interesting looking wader flew in and landed near some Greylags. I grabbed my 'scope but a Buzzard then landed and the bird flew off. Luckily it returned giving some good flight views and I was able to see that it was the Lesser Yellowlegs (and now seen at the third North Uist location).
Likes: Hawkeye
B