Northbay House, Barra
The ****Baltimore Oriole**** was seen there again early this morning

Chrulabig, Isle of Lewis
A Yellow-browed Warbler was seen there today

North Locheynort, South Uist
A Yellow-browed Warbler, 4 Blackcaps, a Brambling and 2 Lesser Redpolls were there today

Bornish, South Uist
3 Brambling were there and 2 Snow Buntings flew over. 24 Black-tailed Godwits were on the machair.

Gleann, Isle of Barra
A Yellow-browed Warbler was there this afternoon 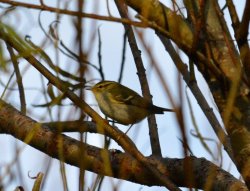 Just before leaving Grimsay with Roger to catch the 10.15 ferry to Barra a skein of ca.350 Barnacle Geese flew S followed shortly after by nine Whooper Swans.

Arriving at the garden of Northbay House we were told the Baltimore Oriole was still present and had been seen on two occasions earlier. The finder Stuart Rivers then arrived and under his guidance for the best places to look we were rewarded with some excellent views. This is the second record for the Outer Hebrides, the first being exactly 30 years ago (stayed for over a week at Gramsdale, Benbecula). 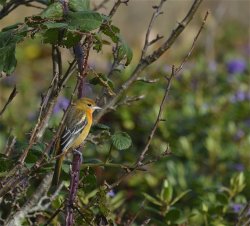 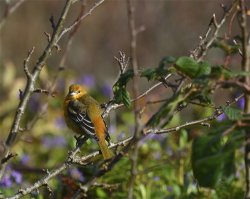 Fewer birds than yesterday, but similar species around the Butt.