Sound of Taransay, Isle of Harris
4 Surf Scoters - 3 drakes and 1 female reported there this morning.

Benbecula
The drake *Ring-necked Duck* was on seen the island. Also present were 12 Gadwall and 3 Pintail

Like John at Ardvule the morning, the southerly passage of Herring Gull was very noticable this morning. I counting 178 in an hour walking along the beach from Askernish to Kildonan. Long-tailed Duck have now begun gathering in the bay at Frobost with 70+ there this morning 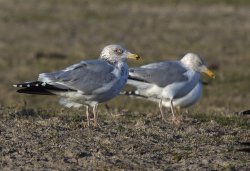 Herring Gull, not one of those heading south
B

Not much change on Barra. The White-billed Diver was still visible distantly from Eoligarry jetty along with 2 Slavonian Grebes. The small Canada Goose was still at Borve with Barnacle Geese and the 2 Pink-foots. Around 40 Great Northern Divers were visible on the sea off Leanish this afternoon, plus a raft of 15 Black-throated Divers way off to the south and 2 Slavonian Grebes flew north. The Corn Bunting was still near the cemetery on Vatersay and a Woodcock was seen flying over the sea towards Sandray.
B

At least 30 Fulmars were on the island of Causamul after the storm of the previous day. Otherwise at Aird an Runair, North Uist this morning I had long-range views of a possible Glaucous Gull that flew out in the direction of the Monach Islands. Shortly after this I noticed a white headed gull with dark tertials on the beach. I was some way away but managed to get some poor photos before it flew towards Port Scolpaig. Did not manage to get any worthwhile shots of it in flight but it may have been a Yellow-legged Gull. This is quite a rarity here with only three records up to 2016 (in three consecutive years 2011-2013).