Stornoway, Isle of Lewis
A 2CY Iceland Gull and a Glaucous Gull were in the harbour area this afternoon

Loch Branahuie, Isle of Lewis
2 female Long-tailed Ducks were seen on the loch this morning

Aird an Runair, North Uist
A total of 33 Pomarine Skuas, and 15 Long-tailed Skua flew north during the day. A further 9 Pomerine Skuas flew north past Loch Paible beach at 14:30

Stinky Bay, Benbecula
The 2CY drake Surf Scoter was seen there this afternoon

Loch Eynort, South Uist
A drake Goosander was seen at the head of the loch

Loch nan Faoileann, Daliburgh, South Uist
A single **Red-rumped Swallow** was seen there this morning to the north of Daliburgh school

Creachan, Barra
A Pied Flycatcher was there this morning 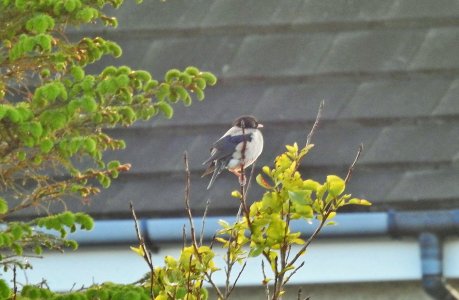