North American Horned Lark,
Askernish, South Uist, 9th October 2014
First accepted UK record​
Having been to Barra the previous day for the Scarlet Tanager with Bill Allan and dipped, it was back to normal. Normal for me here in Askernish, South Uist is a walk around my patch to watch and record the day to day changes that occur throughout the year and to get a higher Patchwork Challenge score than the wife who also “works” the same patch.

My walks always start at the house and the only decision to be made was which of the two routes around the patch to take. Today it would be Loch Hallan. Up to the golf course, along the machair adjacent to the loch to the cemetery and then back along the beach.

The machair was uneventful with the usual Greylag Geese and Lapwing but great views of a Hen Harrier quartering the fields. Turning back along the beach, there were enough Sanderling to make the search for any colour ringed individuals a little longer than usual and there were a few Black-tailed Godwits which are always good to note.

When exiting the beach, the path climbs to the dune edge where I always sit a while to scan the sea. As is often the case, just several seals, cormorants and shags were seen, but there was some activity below me on the strand line. Scanning along the seaweed, there was a small group of pipits, and then a slightly paler bird came into view. As it turned towards me I could see some yellow and black on or around the face and I immediately thought Shore Lark!

I made my way down to the beach when the bird flew 200 yards north with the pipits where it settled once again and started to feed. I worked my way towards it and managed to get close enough to see a brown cap, black breast band, black from bill to eye, widening below, and a pale yellowish supercillium extending behind the eye and widening. I even managed a few photographs before it flew back again to where I had first seen it.

I then made several phone calls to local birders but it was Bill Allan who first posed the question “could it be a yank?” Being unfamiliar with the differences between shore/horned lark, I thought I had better try and get a few more photographs which I did before loosing sight of it. Fortunately, it had not moved far and was seen by local and visiting birders during the following days.

Later, probably like so many others who were looking at their own photographs or those that had appeared on line suggesting the possibility of it being an American vagrant, I was asking myself, could this possibly be a Horned Lark? Limited amount of yellow around its face, pale yellow throat not extending to grey ear coverts, but.........

Fortunately for me, another local birder, John Kemp submitted the description as a probable North American Horned Lark. It is due to his extensive and very diligent research that has resulted in this record being accepted as a first for Britain. I say “first”, but that may be a temporary depending upon another sighting in Scilly in 2004 which is still under consideration but I’ll take a first for Scotland! What I think to be a little ironic is that the only other UK record of a lark of the North American race E a alpestris was also from South Uist, collected by the now disgraced Colonel Meinertzhagen in 1953. This record has now been discredited as it is thought he stole museum specimens and recorded them as his own.

So what started as an ordinary day with a tinge of disappointment ended on a real high and what makes it absolutely amazing is that I found the bird – on my patch!!!

PS As usual on these occasions, my wife was off island and she unfortunately missed it 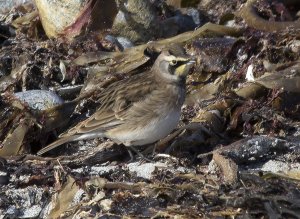 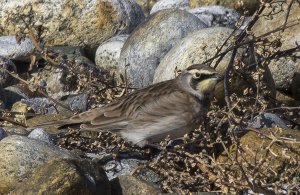